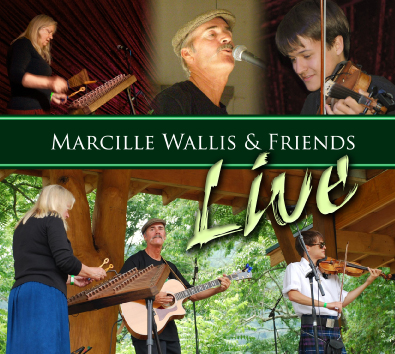 The CD that represents the best of Marcille Wallis & Friends -- Live, as it should be!

We often begin our performances with this medley of tunes.  When Ann and Cal dance their way onstage to "Lark in the Morning," it sets a lively tone for the rest of the evening.

I can just hear the comments over the name The Piper's Weird!  However, it's not at all what it seems.  The Piper's Weird, also known as Macrimmon's, is said to have been written by piper Donald Ban MacCrimmon, who predicted his own death at the 1746 Battle Of Culloden.  "Weird" is a Scots word which means a person's destiny.  Legendary Scottish fiddler/composer James Scott Skinner transcribed the tune.  The Athole Highlanders and Lark in the Morning are both traditional tunes; the first is actually a 6/8 pipe march and the second is a four-part Irish jig.

From Don: I learned this grand old tune from Seamus O'Dyer (RIP).  He could really sing 'em.

From Matt: When it came time to pick the tunes for my set, I had a number of songs in mind, but these three all outshone the others for a number of reasons; I loved the energy and visceral feeling that they gave me when I played them, and the natural progression of the keys they were in gave the whole set a nice build.  The first song, Cuckoo's Nest, is one that I learned from a werewolf banjo player and dear friend of mine, David Capps.  The second song is one of my all time favorite fiddle tunes, and in a way, I feel like I built this set around it.  The last song, Road to Spencer, is a relatively young tune written by bluegrass legend Ricky Skaggs.  I added it as a tribute to a long time friend and cooking god, Uncle Jerry, who loves this song almost as much as I love his baked ziti!

From Don: I always sing this one for the love of my life, Carol.

From Don: You can never have a good kitchen session without some lively polkas!

From Marcille: From the time I was a little girl whose feet didn't touch the floor as she played the piano, to the time that I was all grown up and playing the dulcimer for my living, my parents always loved to hear me play music.  Ever since the time I nervously played this as the offertory at First Baptist Church of Arcadia, Florida, this medley of hymns remained one of their favorites.

From Don: I put this set together one rainy Sunday afternoon. Brightened my day!

The St. Anne's Reel is a traditional French-Canadian fiddle tune that is well-loved by musicians in many traditions.  Is there "magic in the music?"  Composer David Mallett evidently thinks so, as he wrote this ballad based on the tune!

From Marcille: The genesis of the "monstah jigs" was the ODPC FunFest, a dulcimer gathering in Evart, Michigan, which "everybody" just refers to as "Evart."  A group of us Celtoids would get together, night after night, playing up all the tunes we knew in common, teaching each other new tunes, and having a blast.  Somewhere along the way, I started referring to a particular set of jigs as the "monstah jig set;" fellow dulcimer player Kathy Case suggested that we add a new jig each night, and ... I think we may have grown the Evart set to eight or nine, maybe even ten!  Nowadays, for the sake of our audience, we mostly stick to the same set of five tunes, but ya never know ...

These two songs also have associations with the Battle of Culloden.  The Skye Boat Song recalls the escape of Prince Charles Edward Stuart, aka "Bonnie Prince Charlie," or "The Young Pretender," after his defeat at Culloden.  In Loch Lomond there is some doubt as to the exact meaning behind the famous lyrics "O yeï¿½ll takï¿½ the high road, and Ah'll tak' the low road," but there is no disputing the fact that it is one of the most beloved songs in the Scottish tradition.

A song about moonshinin' in the hills of Connemara, Ireland, played and sung as if it came straight out of the hills of North Carolina!

This tune has been one of our big dance numbers since Ann and Cal joined Marcille Wallis & Friends ten years ago.  The dance, called "The Chase," is playful and romantic and funny and charming and ... all that.

13      Whiskey In The Jar
(Click here to listen to this selection on the SoundCloud.)

A highwayman, perhaps a would-be Robin Hood, is double-crossed by his lover; hilarity ensues.  One of the most widely performed and beloved songs in the Irish tradition, Whiskey in the Jar has been recorded by The Dubliners, Thin Lizzy, even Metallica!  Wonder if they do the hand-clapping bit (4 - 2 - 1) at a Metallica concert?

The Orange Blossom Special, it is said, was the first streamline train to be seen in Florida.  Fiddlers Ervin Rouse and Chubby Wise took a promotional tour of the train, got themselves liquored up, and proceeded to write what is arguably the essential tune in every good old-time/bluegrass fiddler's repertoire.  Matt, a great old-time/bluegrass fiddler, has made this tune his own; on any given night you may hear him improvise on Vivaldi ... or on Jimi Hendrix, AC/DC or Black Sabbath.  We never really know what's coming next, and the coolest thing about it is ... Matt doesn't either.

We play for a fair amount of Scottish events.  How else would we end the concert?

From Matt: An incredible hymn, and Marcille's solo intro is one of the most moving renditions of this song you will ever hear. 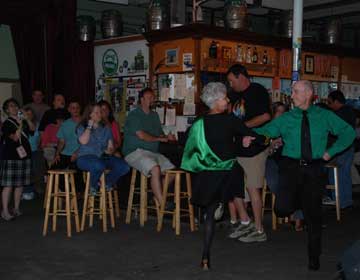 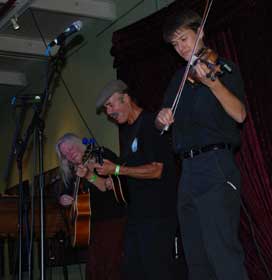 Dedicated to our many friends and fans, whoï¿½ve given us so much support and encouragement over the years!

To our wonderful dancers, Ann & Cal Lloyd, who are such an important part of every live performance by Marcille Wallis & Friends, thrilling audiences with grace, elegance and enthusiasm: Your dedication to your art, and to each other, inspires us!

Love and Special Thanks to our families ï¿½ to Greg McGrath, Carol Pigeon, Candy & David Miller ï¿½ for ï¿½ driving us to and from gigs ï¿½ keeping us fed and watered ï¿½ taking tickets and overseeing merch sales ï¿½ in other words, for seeing to the details of our work, so that we can play!

Back to Celtic Heritage Home

Back to Marcille Wallis & Friends Home